Economic Benefits Analysis – The Other Side of Cost 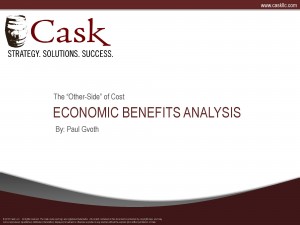 Over the past few years, I’ve been delivering a presentation on Economic Benefits Analysis to both domestic and international conference audiences. Cost estimators and cost analysts are curious about Economic Benefits Analysis because they are sometimes called upon to offset their costs with an estimate of projected benefits and the project’s expected return on investment (ROI). This can be within the context of a Business Case Analysis (BCA), Cost-Benefit Analysis (CBA), or within formal deliverables such as an Economic Analysis (EA) for large major Government acquisition programs. This is important because in today’s disruptive fiscal environment virtually all programs and projects are under review for increased investments, decreased investments, or divestment.
As investment review boards (IRB) take a hard look at portfolios, program managers (PM) will have to come up with compelling arguments, documentation,and an explicit analysis of benefits and ROI in support of continued program justification. Participating in a decision review board with just your Life Cycle Cost Estimate (LCCE) in hand is no longer enough to gain the resources needed to support your program’s requirements. During the next couple of months or so (about every two weeks),I will be walking through a process that we at Cask have termed Capability Based Benefits Analysis (CBBA). The basic premise is that cost estimates are in reality assessments of current and future investments in a project or program that is to ultimately deliver capabilities. Those built-up capabilities are intended to deliver both tangible and intangible benefits in terms of money, or expressed as the creation of new or increased value to the project’s stakeholders, clients,or investors. The unique part of this approach is its ability to combine objective data collected from Key Performance Indicators (KPI), and subjective data such as Military Value (MV) to determine a project’s overall ROI in terms of both hard and soft analysis. This approach can capture the value of a program even if there is no economic basis. Not all programs and projects are intended to provide a direct economic benefit, but may do so through the generation of additional benefits that ultimately link to a financial bottom line. Without capturing and articulating the subjective benefits, the analysis will never get the additional financial benefits mentioned above. These finer differences will be expanded in subsequent blogs in this series, but for now I just want to point out the similarities and differences between cost estimating/analysis and economic benefits analysis. My first point is that cost and economic benefits analysis share some common attributes but in different proportions. For example, both are sensitive to up-front important analytical decisions about allocations and the application of economic concepts such as Net Present Value (NPV), ROI, and Break Even (BE).In addition, the table below shows a sampling of common attributes that are highlighted as to their relative importance respectively to Cost Analysis or Benefits Analysis.

Cost Analysts have a broad base of analogous programs to reference when developing their analysis plan. There is an exception with large Enterprise Re-engineering Programs (ERP) where relatively few exist in government. By studying what worked and did not work, the analyst can shortcut the data-gathering process, be aware of previously identified pitfalls, and select appropriate cost estimate methodologies. The analyst may also seek out Expert Opinions, perform Extrapolations from Actuals, and further the development of Cost Element Structures (CES). On the other hand, the Economic Benefits Analyst usually does not have a lot of analogous economic benefits examples to reference because past program decisions were based almost exclusively on cost. In response to the current constrained fiscal environment, Investment Review Boards now manage programs at the portfolio level which demands comprehensive economic analysis and an evaluation of important metrics such as ROI. To calculate it you need a good estimate of benefits to compare against the cost (investment). But how do we get there? Even though there are many handbooks available on Cost-Benefit Analysis, the problems they cover are usually well-defined, well-specified and supplied with adequate, quality data. The problems I am referring to are ambiguous, not well-specified and are dependent upon largely unidentified or unverified data. Usually these are one-off analyses with no prior work on how benefits should be calculated. Having few examples to reference, the benefits analyst leans more heavily on Expert Opinion or Extrapolations from Actual while building the elusive Benefits Elements Matrix – where the relationships between variables are not as well defined as one would find in the cost estimating world. Next time, I will get further into the details of how to initiate the Economic Benefits Analysis process.